Setup Draytek or your own router for BeThere or O2 When an RDP session is opened from a shortcut it will be displayed on the last screen it was maximised and closed on. Sometimes you might want to change this and hard code it into the RDP File. If you create an RDP Configuration file ( Open up Remote Desktop and configure the settings and server address) Choose options and save the settings to a location. Open up the RDP file and depending on which screen ID you want it to open on add the following screen mode id:i:1  (Screen 1) screen mode id:i:1  (Screen 2) Save the file , and open it to run it on the select screen
VN:F [1.9.22_1171]
please wait...
Rating: 0.0/10 (0 votes cast)
VN:F [1.9.22_1171]
Rating: 0 (from 0 votes)

Changing How Many Emails Are Displayed on the IPAD 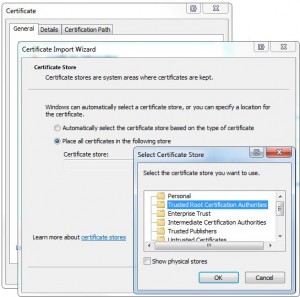 To setup an Outlook Over http from SBS 2003 box , the SBS self signed certificate needs to be installed manually on the clients computer Go to Start , All Programs and find your Internet Explorer Icon Right click on the internet explorer program and choose Run as administrator ( You can also right click on Internet Explorer if it is pinned to your taskbar ) This will open up internet explorer, go to the site where the server certificate is hosted e.g. https://mail.domain.com/remote it will warn you that the “site certificate is not from a trusted certificate authority”. Click on the link which says “Continue to this website (not recommended)” After the webpage is displayed , to the right of the address bar , there should be “Certificate Error” in red, if you single click this, then go to view certificates on the popup window Choose install certificate , choose next , choose the “Place All Certificates in the following store” Then choose the “Trusted Root Certification Authorities” Folder. choose Ok , Next and Finish. It will then pop up with a window , press OK It will then bring up a box about a warning about the certificate, click Yes For SBS 2008 Box’s follow this guide : http://blogs.technet.com/b/sbs/archive/2008/09/30/how-do-i-distribute-the-sbs-2008-self-signed-ssl-certificate-to-my-users.aspx
VN:F [1.9.22_1171]
please wait...
Rating: 0.0/10 (0 votes cast)
VN:F [1.9.22_1171]
Rating: 0 (from 0 votes)

How to Minimise an Remote Desktop Session on a MAC If  you are using a Remote Desktop Connection on a MAC , and you want to minimise the session , so you can switch between your mac desktop and the RDP session the following commands will do this

Recently someone had sent an JPG Image over , however on opening the image from Outlook with Windows 7’s  Photo Viewer it was showing the image as a slide show of five seperate images.Initially confused ( as a TIF is the only mulipage image format ), I thought the slideshow program was being clever and scanning through my Temp Folder and displaying all the photos in that folder, however upon reopening the image from a new location this was not the case. I opened the image up with tools such as Microsoft Office Picture Manager and Paint , and only the first page showed. Upon dragging the image into Infran Viewer, it straight away told me the image was infact a TIF image and would I like to change the file extension! I was amazed Windows opened these fine without trying to decode these as jpg instead of TIFS. So you can fool windows into thinking there are multipage jpgs, could be useful for accountants scanner in and archiving documents!
VN:F [1.9.22_1171]
please wait...
Rating: 0.0/10 (0 votes cast)
VN:F [1.9.22_1171]
Rating: 0 (from 0 votes)

After capturing a video on a standard straight to DVD video camera ,The file was encoded with ASF ( Advanced Streaming Format ) ,I wanted to stream this on the internet. The obvious format would be a FLV file streamed using a flash player. The main program I use to convert files to FLV is a free program called “Riva FLV Encoder 2.0” . This does not support WMV files :(. I needed to convert the WMV into an AVI , This can be done using a previous version of Virtual Dub (1.3 due to a Microsoft Legal Case in which WMV support for virtual Dub was stopped due to Microsoft owning the codec Error Message : ASF files are not supported) Download Virtual Dub 1.3 After importing the file into Virtual Dub 1.3 , It produced an Error “ASF: Illegal Object Fragment flags 0a in packet at 14c0 packing size = 1f40, pp =12,  send time: 0:00” After more research someone has written a Virtual Dub Plugin for WMV support for the latest version of Virtual Dub ( 1.9.0 ). You can download this WMV plugin by fccHandler Here and follow the readme for installation.  However this still produced errors when trying to reencode to AVI To file the WMV (ASF File ) I used a tool called ASF Tools 3.1 I ran a Basic Repair on the WMV then Re-Encoded it. To do this you will need to download and install: Download and Install Windows Media Encoder 7.1 – wmencoder71.exe Install this MPEG4 codec : http://www.divx-digest.com/software/mpeg4codec.html I then open the fixed WMV with Virtual Dub , set : Audio : Direct Stream Copy Video : Direct Stream Copy Then File , Save As AVI. This can then be converted with Riva FLV Encoder 2.0
VN:F [1.9.22_1171]
please wait...
Rating: 9.5/10 (2 votes cast)
VN:F [1.9.22_1171]
Rating: +1 (from 1 vote)

Well I’ve seen the future of on-line music and its one of those things that will revolutionise the industry.A huge selection of On-Demand music anywhere, hosted in the Cloud, Custom Playlists that follow you anywhere as well as the ability to share with your friends and the icing on the cake, supporting the artist through the same adverts as a radio. I know last.fm has offered this service for a while, but Spotify have simplified the process for your average user who just want Music now with the same clean look and speed of Itunes! After plugging this software to as many people as possible I have found this software can be turned portable. Spotify upon installation installs 2 files to C:\Program Files\Spotify “Spotify.exe” and “Uninstall.exe” Grab a new usb memory stick , Copy the Spotify.exe to the memory stick, Plug into a computer at Work, School, University and Internet Cafe, Login with your Spotify details , and your off again!
VN:F [1.9.22_1171]
please wait...
Rating: 7.8/10 (6 votes cast)
VN:F [1.9.22_1171]
Rating: +1 (from 3 votes)